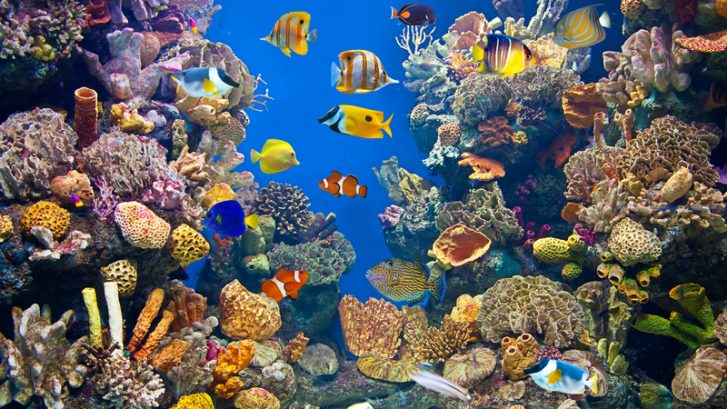 Climate change affects everything on the planet and sea life is no exception. Since the Industrial Age began large amounts of CO2 and other greenhouse gases have had a tremendous impact on the world’s oceans.

When solar energy reaches the Earth it gets reflected back into space or is absorbed and is expressed as heat. Greenhouses gases cause some of this heat to be trapped and it is the accumulation of more and more greenhouse gas that is causing the increasing heat causing global warming.

In addition to soaking up all of this excess heat, oceans also absorb the excess carbon dioxide which changes the chemistry of the seawater making it more acidic. The more acidic it becomes the more it affects sea life. The acidification of the world’s oceans is an inescapable consequence of increased CO2 in the atmosphere and cannot be attributed to any other cause.

Practically everything that exists in the oceans from bacteria to coral to blue whales is influenced by the acidity levels of the seawater. It could literally take thousands of years to reverse what humans are presently doing to the ocean’s PH.

According to a new study published in the Proceedings of the National Academy of Sciences(PNAS), if climate change is allowed to keep on its current pace we will probably see a loss of at least 17% of marine life by the end of this century. For each 1.8 degree Fahrenheit rise in temperature the total mass of sea animals is projected to drop by 5% according to a computer based study by an international team of marine biologists. What is even more disturbing is that these numbers do not even take fishing into account.

If carbon pollution is reduced the losses of sea life could be reduced to as low as 5%. If we do not have a major reduction in greenhouse gases there will be a massive extinction event in the world’s oceans. This is not theory, it is already happening.

The Effect on Food Supplies

Even the most callous of people that may not care about the loss of sea life will change their tune when they realize that it will also have an immense impact on global seafood supplies and prices. This could also cause major conflicts around the world as countries become more protective of their resources, especially as human population continues to increase.

The largest animals will be hit the hardest and we are already seeing it with mass deaths of whales and other cetaceans all over the world. The only good news is that the lower life forms like bacteria and plankton which are the main building blocks of marine life may not die off as rapidly. Tropical and sub-tropical areas will see the greatest losses because of the fact that they are already warm.

University of Georgia marine biologist Samantha Joye, who wasn’t part of the research, praised the study as meticulous and said it is also “an urgent call for action”.

The inevitable result of human destruction of their own environment and ecosystems will be the destruction of humanity itself if humans cannot accept responsibility and do something to slow and reverse the damage that has been done to the planet over the last 150 years.

ClearWorld is doing its part in helping to protect the environment and fight climate change with our patented solar LED retrofit lighting systems.