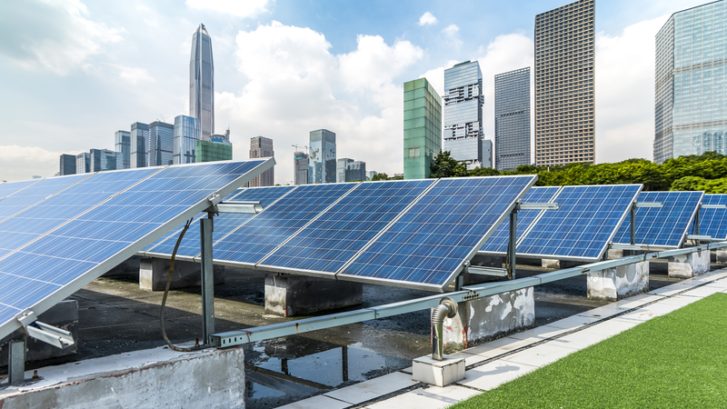 Renewable energy is not yet as dominant in the energy sector as one may think.  Despite all of the buzz about hydropower, wind turbines and solar energy it has a long way to go. Just 17% of energy produced in 2018 was from renewables and most of that was hydropower from older dams.

The tide is beginning to change for sustainable energy as more companies see the benefits. American corporations are citing lower operating costs, increased resilience, and a more positive public image as reasons to move to renewables. As of the beginning of 2018, nearly 20% of Fortune 500 companies have made commitments to the Green Power Partnership program initiated by the EPA. After seeing companies going renewable reporting a collective savings of nearly $ billion we will definitely see more businesses getting on-board.

Utilities Making it More Attractive for Businesses to Go Green

Businesses are realizing that renewable energy use is becoming more common worldwide. The costs of the technology are now no longer cost prohibitive for the average company. Since 2010, the cost of solar panel systems as dropped nearly 75%. This has fired the growth of the solar industry with over 2500 large scale solar power plants in the United States alone.

Purchase power agreements or PPAs allow the purchase of renewable energy directly from the energy providers. In 2018, U.S. businesses signed PPAs for nearly 9GW of solar and wind derived power. This represents twice the total for the previous year. Large corporations like Facebook and Amazon have completed large power purchase agreements from major energy providers. Prices are still higher than traditional rates, but the cost of renewables continues to decline. This will allow green power purchases to incentivize electric utilities to increase the amount of renewable energy they sell.

More companies are investing in on-site solar every day due to the tax benefits and incentives offered. In addition, utility bills are drastically reduced and for some even eliminated. The major concern for these businesses is whether solar and wind can always be counted on. What happens if there are days of little to no wind, or long periods of cloudiness?

The answer to that question is Battery Energy Storage Systems. This advance in renewable technology allows companies to save more on costs as well as get more tax credits. These systems store the power created during the day and then dispense it at night when peak use makes on-grid power more costly. This also reduces the load on the grid for large utilities and makes it a win-win for all parties.

As with wind and solar energy, the cost of battery storage is dropping drastically. The assistant Secretary of the Department of Energy said in April that the cost for storage will be 20% of what it is now within 10 years.

Due to advances in renewable technology, businesses have better choices than relying on antiquated diesel generators for backup power. Having a reliable alternative power source is especially important to emergency services providers and hospitals. As costs for solar and energy storage have fallen it has become more cost effective to build their own microgrids.

Most microgrids are connected to the larger utility grid in their area which helps the utility with more power capacity and stability. In return, the owners of the microgrid receive lower utility bills, get credits of the renewable energy they produce, and many receive incentives directly from the utility company. When there is a power outage, the microgrid is there to provide power off the larger grid. This provides for stable continuity of operations and resilience for the owners of the microgrid.

ClearWorld works with businesses small and large as well as cities and municipalities across the country to help them attain their renewable energy goals. ClearWorld’s off-grid solar LED lighting solutions also allow lighting to be installed in remote locations where conventional power would be cost prohibitive.