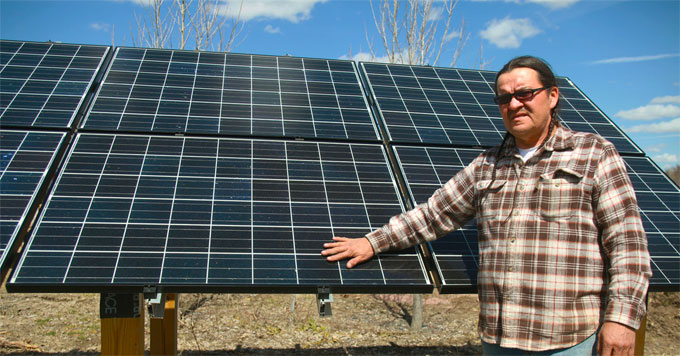 The solar energy potential on Native American land in the contiguous United States is estimated at almost 18 terawatt-hours! This is an insane amount of energy when you compare it to the total utility-scale electricity generated in the entire U.S. was only 4.2 TWh in 2018.

Traditionally the funding for solar development on tribal land has been provided by the federal government, but the funding usually doesn’t provide enough money to cover the cost of the entire project. In addition, poor project management as also hampered solar projects in many cases. As of 2000, there was no access to electricity in over 14% of all Native American households, which is over ten times the national average. Most of these same households also do not have running water.

Funding from federal sources has been of assistance to Native communities being able to access renewable energy, but more could be done. The joining of public and philanthropic funding along with industry experts and nonprofit management could help the Native communities reach the solar energy potential available to them. This would also create more energy security and help reduce the rampant high unemployment that is prevalent on almost every reservation.

Energy Exploitation a Barrier to Transitioning to Renewables

Indigenous communities have been exploited by “dirty energy” industries for as long as the industries have existed. Companies that mine for coal and drill for oil have made these tribes dependent upon fossil fuels to drive their economies. This has made it difficult for those wishing to move to clean energy options.

The exploitation has become extremely obvious in the case of the Dine᷇, or Navajo Nation. Although the tribe has the Navajo Generating Station(NGS) coal plant producing 2.25 gigawatts of power, they also have over 15,000 homes with no access to electricity. For over 45 years NGS has been one of the top employers of Navajo people as well as revenue for the Nation, but the tribe still couldn’t get grid power to rural areas.

Due to the rapidly falling costs of solar and other renewables, continuing to operate NSG has become cost prohibitive. The tribe is now not only shutting it down but another in New Mexico as well. The move will be anything but easy though, over 1,000 members of the tribe worked for NGS, either at the plant or in the mine. In addition, tribal officials are dealing with $35 million in budget cuts connected to the closing of the plants and the mine.

Due to lack of training and technical capacity the Navajo Nation has been limited in being able to expand into the solar energy market. Now, the tribe is moving forward with creating jobs to develop renewable energy projects on the reservation. Navajo Power, a company founded by members of the tribe, has installed over 200 off-grid systems so far. Local Navajo workers are also no being trained to install and maintain solar systems by another Native owned company called Native Renewables.

But the Navajo aren’t the only tribal nation facing challenges in the coal-to-clean transition. Native American communities have been slow to install renewable energy on tribal lands, despite the U.S. Department of Energy’s (DOE) Office of Indian Energy providing an average of $7.8 million per year in federal funding for new renewable energy projects since 2010. According to DOE, these funds have added 43 projects totaling 18.5 megawatts (MW) of new tribal renewable capacity, including 10.1MW of solar and 3.2MW of wind energy.

In 2015, the U.S. Government Accountability Office (GAO) reported poor federal management has hindered energy project development on tribal lands “resulting in missed development opportunities, lost revenue, and jeopardized viability of projects.” GAO’s report also referred to limited tribal technical capacity, similar to Sandia’s 2016 report. In both cases, private sector expertise may have been able to overcome some of these barriers.

Fortunately, GRID Alternatives, a national leader in connecting underserved communities with renewable energy and job training, is helping overcome the problem. The nonprofit is applying a public-private partnership model to Native American communities through its national Tribal Program, which combines public and philanthropic funding with solar industry expertise to install no-cost solar installations in low-income communities, and provide workforce training to local residents.