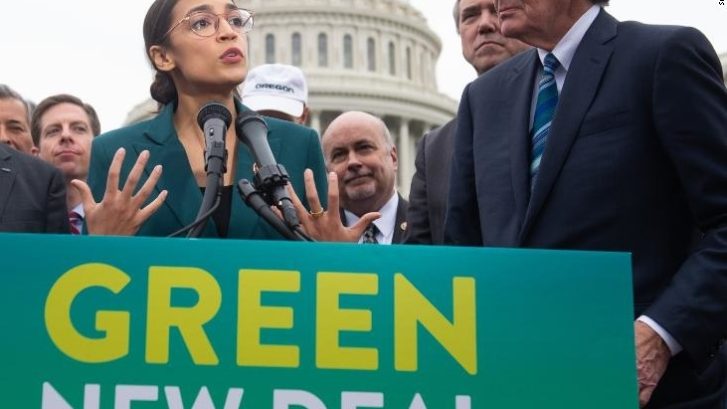 Our economy has allowed the creation of large numbers of polluters which expose the working class families, communities of color, and others into low wages, contamination, and unavailability of jobs. Through this climate catastrophes appear through different phenomena such as flood, drought, and destructive storms which hit the frontline communities.

Some forward thinking members of the U.S government proposed The Green New Deal to eradicate the big number of greenhouse gas emissions and immediately shift to an economy that is less carbon intensive. This resolution aspires to reshape and reconstruct the US economy. It actually aims to cut down greenhouse gas emissions over ten years; produce a massive growth in terms of cleanliness in every community; reduce agricultural pollution, upgrade and systematize infrastructure. It also includes assurance of giving a “family-sustaining salary” which is open for everyone; and provide every residents in US a high quality of welfare and social justice.

It should be the duty of the federal government to first commit, including public management, firm environmental trade rules, antitrust enforcement, and widening the laborer’s rights. The Congressional resolution is actively pushing the federal government to have such investments to successfully achieve net-zero greenhouse gas emissions in a decade by meeting 100% of America’s power demand with clean, renewable sources, including solar, wind, hydroelectric or geothermal energy, a big boon for the green energy industry.

This has subsidized new works which include installing solar panels, retrofitting coastal infrastructure, and manufacturing electric vehicles. It tends to ask for new trade rules to stop the separation of jobs as well as pollution overseas. It also advocates a universal basic income. This is a government guarantee that each citizen receives a minimum income enough to cover the cost of living. It also does not ban fossil fuels, nor does it exclude nuclear energy and hydropower which are often opposed by environmental groups.

Dan Whitten, the Vice President of public affairs at the Solar Energy Industries Association stated; “We love the enthusiasm the Green New Deal has brought to climate issue … but we need to operate in political reality.”

There are 43 members of Congress and hundreds of groups who support the proposal for a Green New Deal. One of the most visible is the Sunrise Movement that focuses on how to stop climate change. Another supporter is MN350; whereas it goes further on arguing that climate change must be reversed to be effective. The practicability of the proposal has been the foundation of ideas which needs to be scrutinized also for the means of the clean energy industry.

According to the 2019 U.S. Energy and Employment Report, the U.S. solar and wind industries have expanded more than four times and now employ almost 350,00 workers nationwide. This productivity had helped to empower the industry’s appeal to Republican lawmakers. In addition, during the last election cycle in 2018, solar and wind companies had contributed significantly more money to the Republican candidates than to their traditional Democratic allies.

At the core of the policy thrust for rapid decarbonization is the view that people cannot be dependent upon freely making decisions as to which fuels to buy and sell and that governments must adopt rules and regulations to force the pace of change. Successful planning of decisions concerning future energy supplies would rely on governments who can judge the future energy market conditions and prices in a rapidly evolving and highly competitive world. The key point here is to determine whether governments already have the information needed to make good decisions relating to which products, services, and technologies are the ethical ones.

ClearWorld is a leader in Solar LED Lighting Solutions and Smart City Technology. The company is dedicated to providing assistance to cities across the country and the world with commitments to 100% renewable energy.