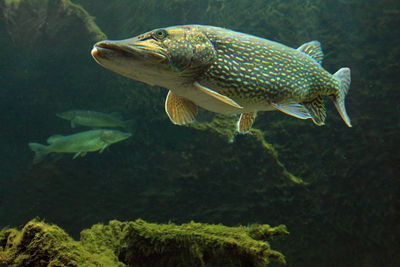 As climate change warms water temperatures in the Great Lakes it is causing population shifts that can already be seen in both cold water and warm water fish populations, even in inland lakes. Marine scientists and managers of fisheries in these areas are extremely concerned about these insights because fish are among the most temperature sensitive of all creatures. Fish thrive at different temperatures dependent upon their particular species, with the warming of the Great Lakes area population changes are causing consequences that have yet to be comprehended.

The changes which affect where fish will be caught could cause harm to the economies of the local areas as well as the fisheries themselves. In Michigan alone over one million anglers bring in well over $2 billion in revenue to the economy of the state every year in a variety of industries including: fishing gear and apparel, accommodations, fishing guides, meals and much more. The changes affect some species more than others; bass are not impacted nearly as much as those like walleye and pike that do better in much cooler temperatures.

At the Michigan Department of Natural Resources, and its counterpart agencies in Minnesota, Wisconsin and elsewhere throughout the Great Lakes region, planning for how to manage fisheries amid these significant shifts is already a matter of urgent study.

A popular sport fish in Michigan, walleye are considered a cool-water fish — for optimal breeding and growth, they want lake conditions warmer than trout, but cooler than bass and panfish. They’re having trouble finding that anymore in southern Michigan’s warming inland lakes, said Kevin Wehrly, a fisheries research biologist for the Michigan DNR’s Institute for Fisheries Research in Ann Arbor.

“Historically, we’ve stocked walleye into inland lakes in southern Michigan, and there are many of those lakes that just don’t support walleye any longer,” he said.

In Canada, inland lakes in Ontario are seeing the effects of climate change as well. In thousands of inland lakes studies of fish populations there have shown species that love warmer water such as smallmouth and largemouth bass are being found in lakes they have never been before. While game fishermen may think this is a good thing it is an issue that affects native fish populations competing for the dame food and habitat.

As much as those living in the South may complain about the heat, air temperatures have warmed faster in the Great Lakes than the rest of the country with a rise of over 3 degrees Fahrenheit since 1901 while the rest of the U.S. rose a little over 2 degrees. Globally the average temperature is projected to increase by another 2.7-7.2 degrees by 2100 depending on how the world deals with future greenhouse gas emissions. The Great Lakes region is expected to meet or exceed these increases if something isn’t done to slow it down. Summer surface water temperatures on the coldest Great Lake, Lake Superior, increased approximately 4.5 degrees F from 1979 to 2006, a significantly faster rate than regional atmospheric warming. Declining winter ice cover is the largest driving factor, according to researchers.

Fish are among the most sensitive animals to temperature, with different species needing a certain water temperature range for optimal breeding, growth and survival.

Warming water from climate change is adding stresses to this balance.

Summer temperatures in the deeper lakes cause water to form distinct temperature bands, warmer near the surface and colder below. This is a phenomenon called thermal stratification which you have no doubt experienced if you have ever dove deep into such a lake in the summer. Warming makes that process stronger and longer-lasting, and oxygen can’t permeate those thermal layers to reach the bottom.

Historic weather records also show climate change is leading to stronger spring storms that spur nutrient runoff from farms and lawns, which, in turn, fuel algae blooms in lakes. When those blooms die in a lake, they sink to the lake bottom and remove oxygen. The layers prevent a replenishing of the depleted oxygen, creating hypoxic “dead zones.” The dead zone in algae-challenged Lake Erie from this phenomenon, every summer into fall, can be more than 6,200 square miles.

“There’s an example of a Great Lake where you’ve already seen, partly through warming and the (depleted oxygen zones) in the central basin, you already see cold-water fish isolated in the eastern basin and not really found much in the other parts of Lake Erie,” said Brian Shuter, a professor in the University of Toronto’s Department of Ecology and Evolutionary Biology.

For fish that need cold, deep water, like lake trout, the lack of oxygen at the lake bottom pushes them closer to the surface, into temperatures and habitats that aren’t optimal for them to thrive, Wehrly said.

“We had about 153 cisco lakes in the state historically” out of Michigan’s 11,000 inland lakes, Wehrly said. “We’ve lost a number of those populations because of that total loss of oxygen in the cold water portion of the lake during the summer.”

When Karen Alofs looks to see how fish populations are changing in Ontario lakes, she doesn’t use waders and nets. She uses a computer and big datasets.

Alofs, an assistant professor of applied aquatic ecology at the University of Michigan’s School for Environment and Sustainability, has spent the past several years, going back to her days at the University of Toronto, studying how warming waters in the northern Great Lakes region might be affecting where fish live.

Fortunately for her, the Canadian province of Ontario offered a great way to check: data from fish surveys in 1,527 inland lakes, taken both decades ago, between 1957 and 1986, and again more recently, between 1983 and 2011. The surveys for each lake, on average, were about 29 years apart.

Crunching the numbers, Alofs landed a big finding: The northern range of warm-water-loving sport fish such as largemouth and smallmouth bass, bluegill and pumpkinseed is shifting farther north, and rather dramatically: from 8 to almost 11 miles per decade.

“The large-bodied sport fishes were the ones that had the largest shifts in their distributions northward,” she said. “For example, smallmouth bass is one of the species that’s expanding north, and now occurring in lakes in northern Ontario that were previously too cold for them.”

While bass expanding their ranges farther north sounds on its face like good news for bass fishermen, it’s more complicated than that.

In the northern lakes where warm-water predator fish like smallmouth bass are establishing themselves, small prey fish — we’d call them minnows, Alofs said — decline, and are more likely to vanish from lakes. Brook trout also tend to decline, she said, as the bass compete for the same food.

The loss of prey fish not only potentially impacts the cool- and cold-water species of fish already living in northern lakes, it could cause an eventual crash in populations of the bass now gaining a foothold.

“Bass are extremely efficient predators in warm water,” Shuter said. “They pretty much clean up the feeder fish that lake trout also rely upon.”

“Fish can act as a canary in the coal mine, and be indicators of environmental problems as they emerge.”

ClearWorld is concerned about how climate change impacts all species and we are determined to do our part in helping cities and municipalities meet their commitments to going renewable as soon as possible. Visit ClearWorld’s website to see the solar LED lighting systems available.