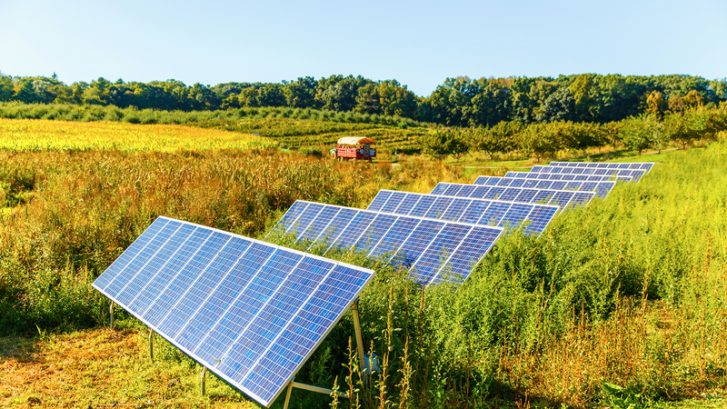 Solar farms and farmers have historically had a love-hate relationship but that is changing rapidly as farmers embrace the stable income that solar brings. Many states have enacted laws that limit the use of farmland for solar farms after being pushed by conservationists. Michigan, however, just recently had over 5,000 square miles opened up to solar farm development by a new government ruling. Farmers are actually in favor of it because it gives them a new income stream they can rely on.

It isn’t surprising that farmers across the country are now becoming not only accepting of solar farms on their lands, but even evangelical about it. When one considers that farmers have been hit hard over Trump’s trade tariffs it is no wonder they are looking for stable income and solar provides it. In addition to giving them stable energy costs and saving them a ton of money they are actually earning by leasing their land to larger solar farm developers.

This policy to allow commercial solar panel development in Michigan by the Department of Agriculture and Rural Development may set an important precedent that other states can follow. The policy which enrolls 5,300 square miles into the Farmland and Open Space Preservation Program also provides tax incentives that encourages farmers to keep their land for agriculture.

The amount of land involved in this initial enrollment accounts for nearly 10% of the land in Michigan with most of it in the area known as “The Thumb” and the rest in the central part of the state.

Both farmers and solar developers are encouraged to read and fully understand the caveats of the program as outlined below directly from the government PDF of the program:

Pursuant to the Farmland and Open Space Preservation Act, MCL 324.36101 et seq. (the Act) and Paragraph 2 of the Farmland Development Rights Agreement with the Landowner, MDARD, subject to appropriate permitting by the local governing body, may permit structures to be built on property enrolled in the program if the structures are consistent with farm operations. MDARD will work with the local governing body to determine appropriate bonding requirements.

In all cases, conditions for exiting Farmland and Open Space Preservation Act, MCL 324.36111(a)) shall apply throughout the solar agreement and deferment period.

A Q&A on the use of solar under the program can be found on the MDARD website.

ClearWorld applauds the move by the State of Michigan to encourage solar development as well as provide a way for farmers to add an additional stream of stable income. ClearWorld is a leading provider of patented solar LED lighting systems across the country and expanding globally. Contact us to discuss your commercial solar lighting needs.