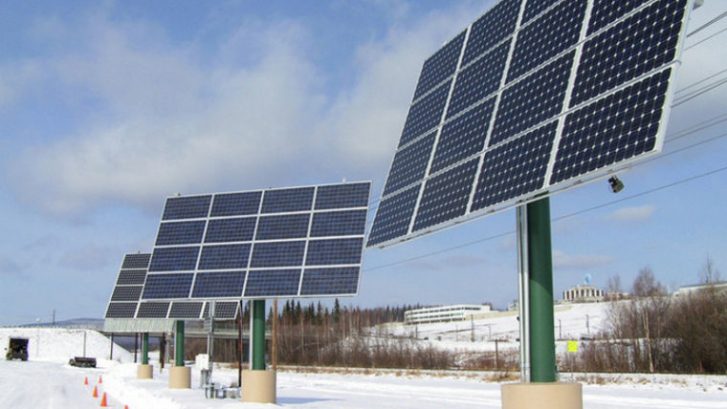 Solar lighting isn’t something that one thinks about doing in Alaska right off the top, but it’s growing. Over the last few years solar panels have been installed on buildings all over the city of Anchorage. This is great news for residents and the solar industry alike as more Alaskans across the state are relying on solar to provide power for homes and businesses.

In Anchorage, Artic Solar Ventures has seen solar installation quadruple every year. 2019 is forecast to be a breakthrough year for the company as it will exceed 1,000 kilowatts, or one megawatt of solar power installed across the state.

It is a common misconception that there is not enough sunlight and too much snow in Alaska for solar to be viable, but this is clearly not the case. The use of solar power has been around for decades in Alaska with the Solar Design Manual for Alaska being published in 1981. The manual was republished last year as a revised 5th edition by the Alaska Center for Energy and Power and the Cooperative Extension Service.

As one would assume, the cost of power in the Land of the Midnight Sun is extremely high. This is why rural communities in particular, along with fish camps and off-grid cabins have long turned to alternative energy sources like solar and wind power.

While rural areas have long embraced solar it had been slower to catch on in urban areas until relatively recently. That has all changed now and more businesses and homeowners have been transitioning to solar. The single biggest factor in the growth of the solar industry in Alaska is cost. A study from November 2018 published in the Energy Policy journal stated that from 1980 to 2012 the costs for solar modules dropped by around 97%

Erin Whitney, manager for the solar technology program at the Alaska Center for Energy and Power (ACEP), echoes the cost sentiment, saying, “I would say in rural Alaska it’s become quite popular because it’s quite cheap.” She also said, “It’s easy to install. Kits are pretty much turnkey. A wind turbine requires a massive foundation, which requires heavy equipment. If you’re in a rural village, it’s expensive, whereas a solar panel setup — that can be installed in a day.”

Stephen Trimble, owner and founder of Artic Solar Ventures, says that installing solar in Alaska requires innovative methods to maximize the solar energy available. One such method is to install the solar panels vertically on the walls of buildings instead of rooftops to prevent snow build up. This is becoming less of an issue in Anchorage as it is getting much less snow due to climate change.

Here’s the reason solar works in Alaska. From May through October there is over 12 hours of daylight even in Anchorage. Trimble says that his company has installed solar on more than 20 homes that are 100% net solar for the year. The peak season of longer days makes up for the dark winter months. If solar lighting can be done in Alaska then it should make people realize it can by done just about anywhere.

For over a decade now the biggest growth in solar installations has been in the greater metro area of Anchorage, which accounts for half the state’s population. Through the campaign, “Solarize Anchorage”, residents are joining together to hire solar energy contractors. By banding together the residents are able to increase their buying power and lower their individual installation costs. This is important considering that a single homeowner can pay $5,000-$10,000 to install solar on their home.

The popularity of solar isn’t just growing among residents and business owners. Numerous Alaskan based utility companies have also installed solar or have plans to do so. Golden Valley Electric Association built a 563 kilowatt solar farm in 2018. The cost to the utility was around $850,000 after accounting for the $225,000 they received from a rural energy development grant from the U.S. Department of Agriculture.

Another factor that is motivating many to jump on the solar bandwagon is the tax credit. 2019 is the last year to receive the full 30% tax credit and beginning in 2020 it starts to go down. Eventually the tax credit will only be 10% so many are taking advantage this year.

“Whether you’re politically conservative or politically liberal, it doesn’t matter, because if you’re assessing solar as a potential customer, there’s the environmental benefits, there’s the immediate electric bill savings on a daily, weekly, monthly basis that are very substantial,” he said. “Most of our solar installations produce power at about a third of the cost of what they pay.”

Trimble and a number of other solar installers recently banded together and formed their own trade association: the Alaska Solar Energy Industry Association, or AKSEIA.

“As any new industry tries to take shape, there can be people who come along when they see economic opportunity … and you get unqualified people doing work that can cause damage to homes, potentially produce injuries; at minimum, giving solar a bad name,” he said. “So we came up with this industry code of ethics to start introducing consumer protections from our side. We very much want to self-police and self-govern the industry, and everyone’s been very receptive.”

If solar can be effective in Alaska, it can be effective virtually anywhere in the lower 48 states. Some in northern states are still dragging their feet but the time for solar has come and those embracing it are seeing big savings on their power bills.

ClearWorld provides a unique patented solar LED lighting system that features vertical wrap-around solar panels that have been tested to be wind resistant to 180 mph. In addition the vertical design prevents snow or dust accumulation that is inherent in conventional solar panels. Contact Us for your solar lighting needs.