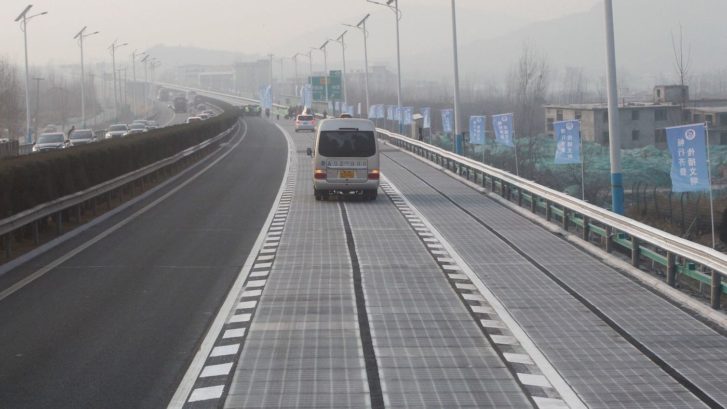 (Los Angeles Times) Putting solar panels into our roads isn’t the craziest idea. But we may as well admit that it poses some unique challenges. For instance, people may want to walk away with pieces of it. That’s what happened in China, anyway, just five days after authorities took opened up what they claim is the world’s first solar panel-paved highway.

As reported by the Qilu Evening News (and noted by TechNode), the experimental kilometer-long stretch of road in Shandong is covered in more than 10,000 solar panels, sandwiched between an insulating layer on the bottom and durable, transparent one on top — less than 3 cm thick all told. There are coils that can charge electric cars as they drive over it, and the system can even warm up in order to melt snow and ice. It opened up to use on December 28.

Unfortunately, during an inspection on the morning of January 2, officials found a narrow piece missing, neatly cut. About 6 inches wide and 6 feet long, the piece didn’t appear to have detached on its own — suggesting someone stole it. But why?

Solar panels are cheap, and this wasn’t very much of them anyway. One official said it may cost thousands to repair, but why such a small piece? And why not take it before the road was operational? If sabotage was the goal, why cleanly take such a small chunk instead of damaging or painting over a larger section?

That it appears to have been done by a “professional team,” (Google’s translation) according to an industry source cited by the local news channel, may give some insight. Perhaps they’re interested in the technology, speculated another source.

Indeed if a group wanted to replicate the photovoltaic sandwich and offer a similar product for a lower price, this might be exactly what they’d do. The practice is not uncommon in China, but this seems an unlikely target for counterfeiting.

At any rate, the road is now open after repairs were made, and no further pieces have been stolen. The biggest loss here, for now anyway, seems to have been commuters’ time. The local police, however, are continuing their investigation.

China’s solar integration in infrastructure is great. However, smart planning must be part of the equation to ensure all bases are covered. Considered a crucial part of this critical planning process when selecting and implementing new technologies are theft and vandalism. Greatly minimized the potential issue of threat, thanks to our intelligent product design for Clearworld clients. We purposely house the electronics at the top of the solar arrays, making theft difficult. This feature allows clients to utilize our products that best benefit the city without worry of theft or damage.